Soybeans traded lower. Concern about declining China demand for importing soybeans due to drop in hog numbers weighed on prices. Drop in China exports from Brazil and new buying forced Brazil soybean prices lower. SX traded back below 200 day moving average with momentum now turning lower. WOB has said they will adopt the new NASS soybean planted acres on their July 11 supply and demand report. USDA Undersecretary suggested Prevent Plant acres could reach 10 million this year with claims hitting $1 billion dollars. USDA numbers suggest that there are 6.7 of intended US soybean acres yet to be planted. Largest unplanted states are IL, MO, OH and IN. Soybean crop ratings remain at 54 pct good/ex. Largest decline were in MN, IN, ND and TN. Conditions improved in AR, LA and MI. Talk of lower China soybean demand due to AFS may be weighing on soybean prices. 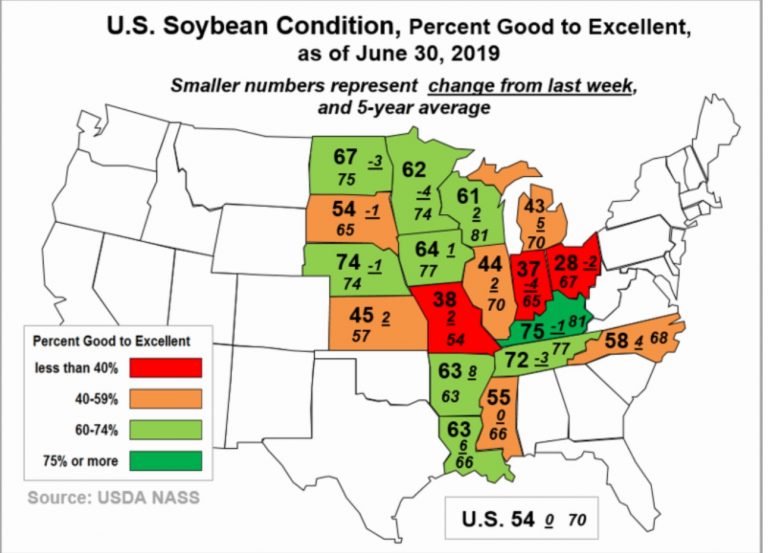 Corn futures ended higher. Increase in open interest could suggest end users may be adding coverage after break in prices following USDA acreage report. CZ found support near the gap near 4.20. Market is becoming oversold. Fact fund selling slowed may have also supported prices. We are hearing from upset US producers who cannot figure out why WOB lowered US corn acres and yield in June then NASS estimated corn acres higher than expected last week. WOB has said they will adopt the new NASS corn planted acres on their July 11 supply and demand report. USDA Undersecretary suggested Prevent plant acres could reach 10 million this year with claims hitting $1 bil dollars. USDA said that 56 pct of the corn crop is good/ex versus estimates of a 1-2 pct improvement. Largest drop from last week was in OH, IL IN and NE. Conditions improved in CO, ND, WI and SD. Interesting to note that 17 pct of OH and 16 pct of MI corn crop has not yet emerged. 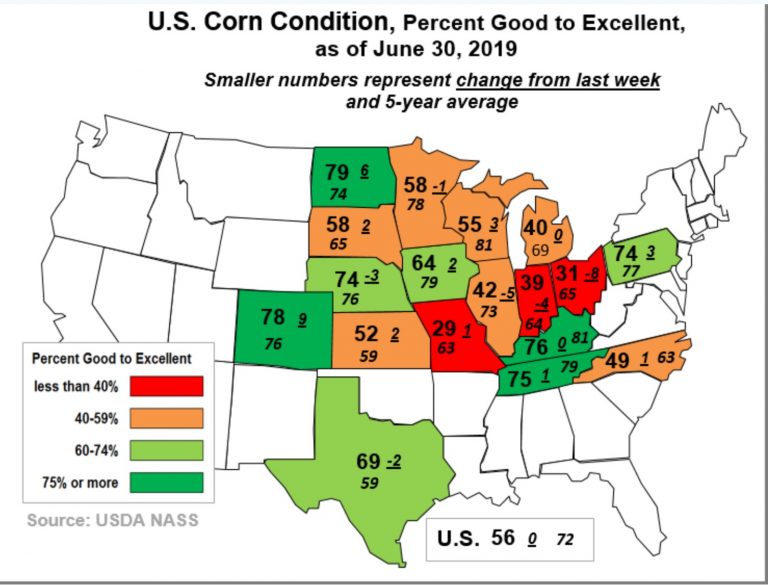 Wheat traded lower. Talk of better than expected US and Russia Winter wheat yields offered resistance. Fact US SRW export prices were also above East Europe and Russia prices at the Egypt tender may have also weighed on prices. Market may have also been disappointed that Egypt bought only one cargo in their tender. US winter wheat crop improved 2 pct to 63 pct good/ex. USDA will revise US and World supply and demand on July 11. Most look for US crop near 1,902 mil bu, demand near 2,023 mil bu versus 2,022 last year. Exports could be closer to 875 vs 950. Feed use could be closer to 140 vs 50 last year. Domestic food use could remain near 960 mil bu. World 2019/20 wheat end stocks could increase to a record 288.0 mmt. Production could be a record 776.3 mmt. Trade could also be a record 185.1 mmt with US share only 23 mmt.