November soybeans turned higher after trading down to a new low for the move at 851 early in the session. The market is up 3 ¼ cents at 861 into the mid-session. December soybean meal is up $1.70 at $294.70 and December soybean oil is down .16 points at 28.49. The soybean export inspections for the week ending September 5th came in near expectations at 906,029 metric tonnes. Cumulative inspections year-to-date are 501,778 metric tonnes which is 39.9% below last year. This is 1.0% of the USDA’s forecast for the 2018-19 marketing year versus the five year average of 1.1%. The top three destinations were China with 408,800 tonnes, Mexico with 71,400 tonnes and Egypt with 64,300 tonnes. China’s August soybean imports were seen at 9.48 million tonnes up from 8.64 million last month and compared to 9.15 million last year. The January-August total imports are 56.32 million tonnes down 9.2% from last year. Traders are looking for the soybean crop conditions to come in at 56% G/EX compared to 55% G/EX last week and compared to 68% last year. 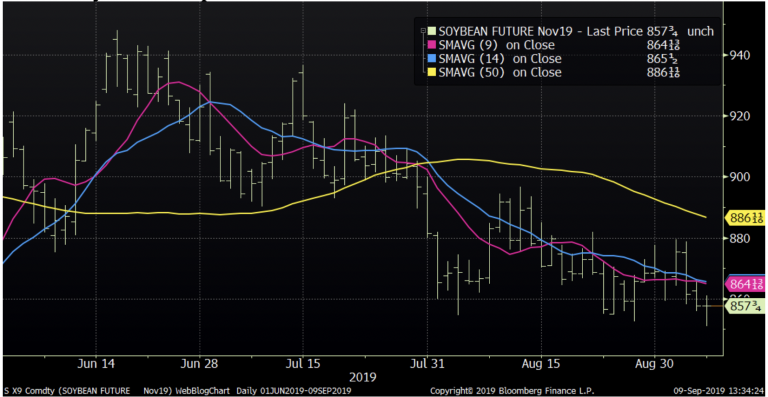 Traders are looking for corn crop conditions to come in unchanged from last week at 58% G/EX compared and compared to 68% last year. The NWS 6-10 and 8-14 day outlooks have above normal temperatures and above normal precipitation for most of the Midwest from September 14-22 which will benefit the late developing crops. The open interest in corn went up 11,136 contracts on Friday with speculative funds continuing to add to their already net short position. The managed money traders increased their net short position by 25,234 contracts to 119,371 contracts as of September 3rd. 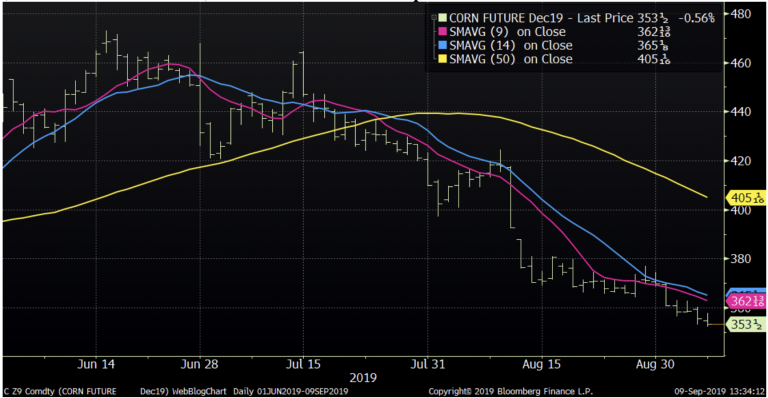 Wheat markets have found support heading into the close with Chicago December up 11 ½ cents at 475 ¼ and Kansas City December up 4 ¾ cents at 398. Some short covering ahead of Thursday’s USDA report can be seen as the managed money traders added a combined total of 27,217 contracts of net shorts in CHGO, KC, and MPLS wheat contracts last week to 87,274 contracts as of September 3rd. The average estimate for Thursday’s report has 2019-20 wheat ending stocks at 1.020 billion bushels (0.989-1.066 billion range) and compared to 1.014 billion in August. The world ending stacks are estimated at 284.6 million tonnes (268.0-288.1 million range) and compared to 285.4 million last month. Traders are looking for the spring wheat harvest to come in at 71% complete versus 55% last week and compared to 93% last year.

Wheat export inspections for the week ending September 5 came in at 402,486 tonnes. Cumulative inspections year-to-date are 7,000,841 tonnes which is 22.7% above last year. This is 26.2% of the USDA’s forecast for the 2019-20 marketing year versus the five year average of 27.4%. The top three destinations were Thailand with 58,300 tonnes, Italy with 46,800 tonnes and Japan with 37,600 tonnes. Saudi Arabia bought 780,000 tonnes of wheat last week, more than the 595,000 tonnes that was expected. This was the first tender for the country since changing their quality rules to allow Black Sea region suppliers to participate. Relaxing the bug damage rules could help top wheat exporter Russia to finally break into the Saudi market. The Middle Eastern country normally sources its wheat from Germany and other Baltic nations and it is thought that the recent tender was bought by traditional suppliers. The open interest in wheat went up 74 contracts on Friday with Kansas City up 1,689 contracts. 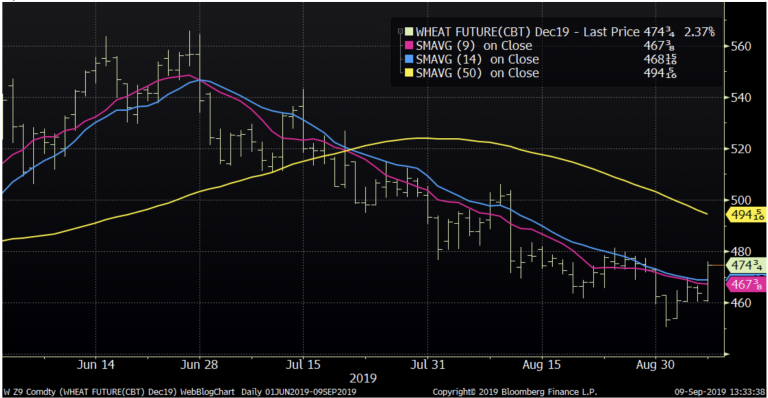