Yesterday’s September USDA Supply & Demand report for soybeans was viewed as neutral with the average yield coming in at 47.9 versus 48.5 bushels last month. NASS used an implied pod weight that was very optimistic. At .35 grams, it would be the highest in ten years. Total production is seen at 3.633 billion bushels versus 3.680 billion bushels in August. The 2019-20 ending stocks are estimated at 640 million tonnes versus 755 million in the August report. The demand increases were seen in the 2018-19 crop year with exports up 45 million and the crush up 20 million bushels. World ending stocks came in at 99.2 million tonnes versus 101.74 million tonnes in the August report. The average estimate for Monday’s August NOPA crush is 162.42 million bushels (160.0-169.0 million range) versus 168.09 in July and compared to 158.89 last year. Oil stocks are estimated at 1.396 million pounds (1.335-1.450 million range) versus 1.467 million pounds in July and compared to 1.623 million last year. 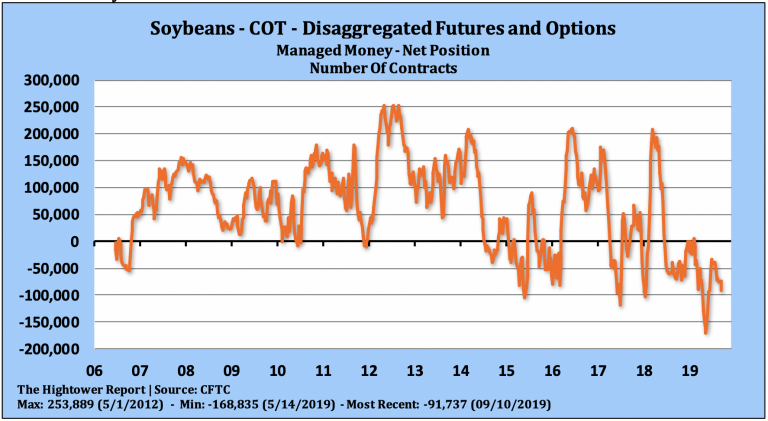 December corn settled at 368 ¾, up 1 ½ cents on the week leaving the market up 13 ¼ cents on the week. The market put in a bullish outside week high higher close. Yesterday’s report was slightly bearish but the market closed strong off of short covering buying. The September USDA Supply & Demand report showed US corn yield at 168.2 bushels per acre versus 169.5 bushels in August. NASS had the corn objective yield with the lowest plant population since 2012 and the ear weight the lowest since 2015. Ear weight could easily move lower if the growing season runs short. The harvested acres came in at 82 million acres versus unchanged from last month. Total production was seen at 13.799 billion bushels versus 13.901 billion in August. The US ending stocks came in at 2.190 billion bushels versus 2.181 billion last month.

The USDA increased the 2018-19 ending stocks by 85 million bushels by lowering ethanol usage 50 million bushels and exports 25 million bushels. They also cut 2019-20 ethanol usage by 25 million bushels. World ending stocks came in at 306.27 compared to 307.7 million in August. For the week so far, the market is up 12 cents with a potential outside week higher developing. The trade may still be looking for yields to ratchet lower in subsequent reports. If you recall, last year the September report pegged the corn yield at 181.3 bushels per acre only to see it lowered to 178.9 in December with a final yield at 176.4 bushels per acre. The open interest in corn went up 4,522 contracts. 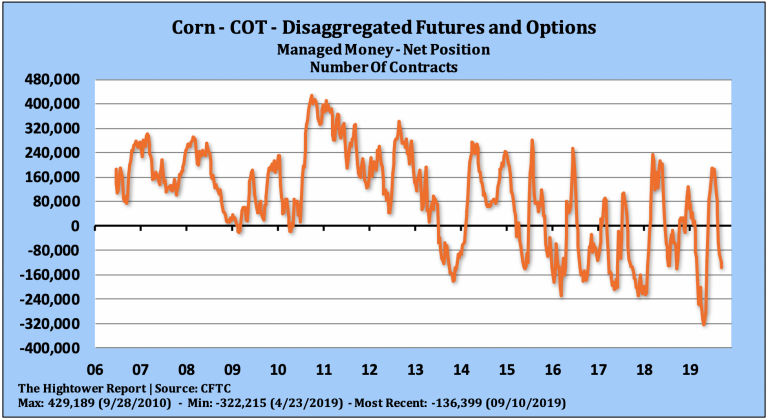 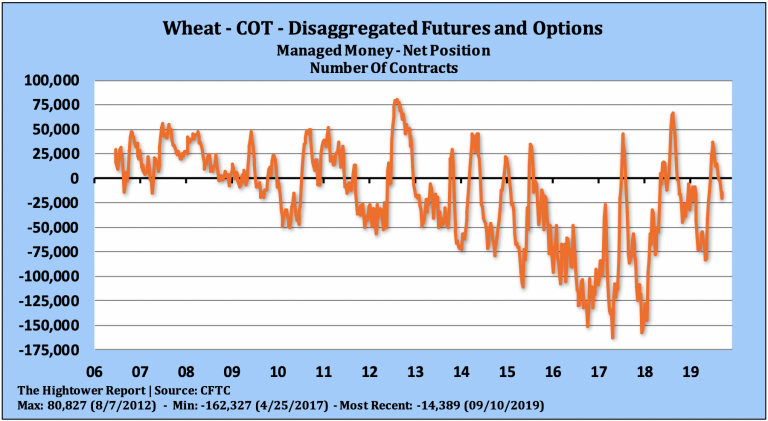